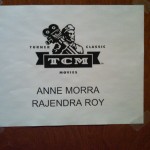 On Wednesday, March 16, Turner Classic Movies (TCM) will celebrate the film preservation work of The Museum of Modern Art with 24-hour program of 14 films drawn from MoMA’s collection. Chief curator of film Rajendra Roy and I flew to Los Angeles in late February to tape cohosting spots with the well-known TCM host Robert Osborne. We were eager to be a part of TCM’s ongoing commitment to spotlighting efforts to protect the world’s cinema heritage. And we also got to sit in the red leather chairs during the interview with Mr. Osborne!