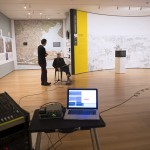 Collecting Alvin Lucier’s I Am Sitting in a Room

In 1969 American composer Alvin Lucier first performed his landmark work I Am Sitting in a Room, conceived for voice and electromagnetic tape. Lucier read a text into a microphone. Attempting to smooth out his stutter, he began with the lines, “I am sitting in a room, the same one you are in now. I am recording the sound of my speaking voice.” As described in the text, his voice was recorded, then played back into the room. This process was repeated, and with each iteration Lucier’s recorded speech grew muddled, sounding distant, and specific sonic frequencies started to dominate the recorded sound.