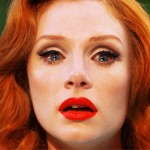 Taking her cues from the films of Alfred Hitchcock, David Lynch, and Douglas Sirk, as well as from the staged photographs of Cindy Sherman and Guy Bourdin, Alex Prager’s pictures focus on cinematic images and mise-en-scène. Sharing personal anecdotes about her life and work, Prager tells us in the video interview above how she came to take her first photographs and make her debut film Despair (2010), which has its U.S. premiere in the New Photography 2010 exhibition.