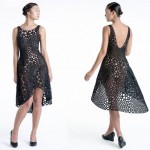 One of the most fascinating pieces in the current design exhibition This Is for Everyone: Design Experiments for the Common Good is a pretty dress with a classically feminine silhouette that wouldn’t look out of place at a fashionable cocktail party. But take a closer look at its supple but strangely undulating texture, and you’ll find that this frock is like no garment you have ever seen—because it was created with a printer.