Setting the Stage: Fort Makers at Warm Up 2015

The courtyard at MoMA PS1 is empty, the museum has just closed, and the last visitors have trickled out. Curiously, there’s a lone stool in the middle of the Warm Up dance floor. On it, there’s an iPhone balanced precariously against a pen, acting like an impromptu tripod. This MacGyver-esque contraption has been set up to capture the unveiling of painter Naomi Clark’s latest work unfurling down the façade of the building, her largest painting to date and one of the last stage designs of this summer’s Warm Up music series. Started in 2009 by MoMA PS1 curatorial associate Jocelyn Miller, Warm Up’s stage design initiative was developed to further the museum’s founding tenet of art in all places while also featuring emerging local design talent. This year’s designers included Chen Chen and Kai Williams, 69 Worldwide, Fort Standard, Fort Makers, and The Principals. As Wallpaper magazine’s recent article stressed, the common denominator across all of these installations was a mix of ingenuity, resourcefulness, and speed. Each weekend was a design charrette that lasted a little under 24 hours. Here’s a glimpse at how it worked:

A few weeks before Warm Up starts, we began preparations, made site or studio visits with the designers, and discussed initial concepts. For Brooklyn-based collective Fort Makers—which brings together the creative and artistic talents of Nana Spears, Naomi Clark, Noah Spencer, and Elizabeth Whitcomb—I met them in their studio near the Brooklyn Navy Yard. Fort Maker’s practice incorporates everything from live-action painting and performance to woodworking. This year, they showed me a sketch of their Warm Up design: a large-scale painting that extends two stories above the terraced canopy below and cascades downward, ending at the foot of the stage. The top of the work uses a graphic black-and-white palette, while bold colors are concentrated on the bottom half, directly behind the stage. Sketch of Warm Up stage design by Naomi Clark. August 2015

As a producer, it’s always fascinating to see how the different designers optimize the constraints of the courtyard at MoMA PS1. The canopy over the stage offers the only means of suspending work directly above the stage, and the pieces have to be light and simple enough to be set up in a matter of hours. Chen and Kai welded small mini grids to circumvent the existing truss layout and suspended long slender tubes filled with water in delicate clusters. The Principal’s inflatable dance party AirMOSH playfully paralleled the line of inflatable dancers behind the stage with 20-foot-high versions on the roof of the building. For Fort Makers and Fort Standard, the entire central volume of the building’s façade became an extension of the stage backdrop. With pieces of this magnitude, the install crew (a mix of designers and the MoMA PS1 installation team) separates into two groups—one climbs onto the roof, attaches the piece from above, and slowly maneuvers it down the façade as the other gives directions from below. As the second painting gets hung below the stage, the sky gets dark, and we test different lighting configurations to illuminate both paintings. The piece behind the stage comes alive at night, turning into a kind of stained-glass window. 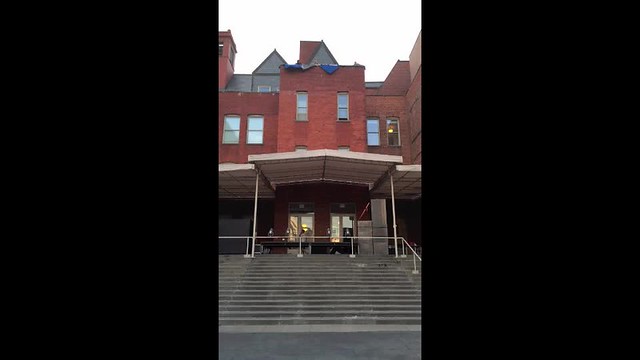 For Clark, seeing the piece installed was itself a revelation—because of it’s size, she had never actually seen the piece in in full. Of course, the Warm Up stage designs really came to life during the concerts. They truly act as environments, responding to the pulse of thumping bass, and dancing in the sweet breeze of the summer afternoon.